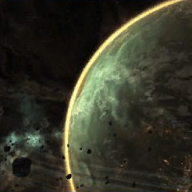 In Ruins of Doom, the player must investigate reports of House Mo'Kai activity in the Imaga System, believed to be a site where Prototaxites stellaviatori grows.

The Klingons think House Mo'Kai forces are up to something in the Imaga system. I understand there was a problem with a... "planet killer" in that system a while back. Interesting.

Where was I? Right, Imaga. In addition to a lot of debris and the ruins of this... planet killer, there are spore colonies there. And House Mo'Kai is probably harvesting them, so we should put a stop to that, real soon.