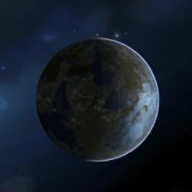 In Sentinels, a research facility on a small moon in the Donatu System is studying Prototaxites stellaviatori, and must be defended from Elachi raiders.

A research team is analyzing spore colonies in the Donatu system. Their facilities are on a small moon there, but it's practically defenseless. Considering recent events, the Alliance wants to change that, and soon.

They want us to go to Donatu and deploy defense satellites in orbit around the moon. Hopefully that will discourage anyone looking to harass the researchers... or steal the spores.