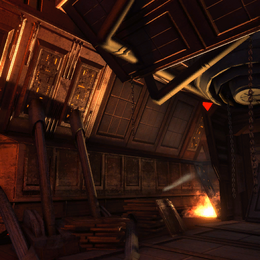 I know you've been looking for Tovan's sister, Rinna. I've managed to find out some more information about her.

She was captured in the Pheben System. She's been questioned by the Tal Shiar, and now they're moving her and other prisoners to a penal colony deep in Romulan space. They'll be using civilian transports, lightly guarded by a few Romulan Star Empire ships.

She'll be on a transport passing through the Kinkuthanza System. If you don't go now, you'll never see her again.

I'm risking my position to tell you this, Centurion. Don't make me regret my decision.

Intercept a prisoner transport in the Kinkuthanza System, which is located in the Beta Quadrant.