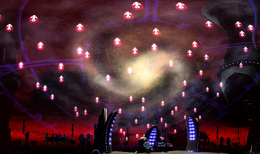 In Sphere of Influence, the player and other representatives of the Romulan Republic, the Federation and the Klingon Defense Force are invited by D'Tan to New Romulus for the reactivation of a recently discovered Iconian gateway.

Due to an accident during its reactivation, the player, along with Ambassador Worf, Va'Kel Shon and other Federation, Klingon and Romulan representatives, is forced to use the recently discovered Iconian gateway on New Romulus. Trapped in subspace the group encounters the Solanae but eventually manages to return after reactivating all still operational gateways in the Milky Way. In a commandeered Obelisk Carrier, the group uses one of the gateways and emerges in the Jouret System, where they have to fight off an Elachi force trying to defend the newly uncovered gateway.

The gateway discovered beneath the surface of New Romulus is prepared and ready for activation.

I would be honored if you would join us, <rank>.

This mission can only be completed as a single player.

Go to New Romulus, which is located in the Beta Quadrant, and attend the dedication and reactivation of an Iconian gateway.

For a full transcript of this mission, visit the Transcript page.