This mission replaced “Taris (original)”. For the NPC, see Taris. 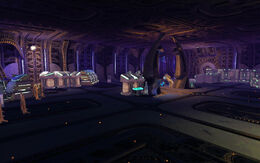 In Taris, the player is sent to the Hobus System to find clues about the destruction of Romulus and Remus, and to discover whether Taris was involved in creating the supernova that destroyed them.

The crew chases down rumors that the former Romulan praetor is still active, and searches for proof that she was responsible for the destruction of the Romulan homeworld.

The cause of the supernova that destroyed Romulus remains a mystery. Our allies in the Romulan Republic have a theory on the matter, however.

They believe that Taris, the former Praetor of the Romulan Star Empire, is responsible. Republic forces attempted to apprehend her, but she escaped through an Iconian gateway.

Recently, the Republic has discovered new information that could help us track down Taris. We want you to rendezvous with the R.R.W. Lleiset, the new flagship of the Romulan Republic fleet, and provide any assistance you can.

Travel to the Hobus System, which is located in the Beta Quadrant, and rendezvous with the R.R.W. Lleiset.