Star Trek Online Wiki
Register
Don't have an account?
Sign In
Advertisement
in: Removed from the game, Legacy articles, Age of Discovery (episode arc),
and 3 more 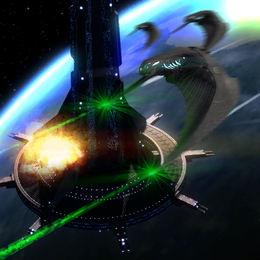 Given by:
Admiral Quinn

History is often the means to predicting future conflicts... and resolving them as peacefully as possible.

The history of the Federation and the Klingon Empire is heavily dominated by our conflicts. Centuries ago, they were dedicated foes. The Klingons nearly brought the Federation to an end in the middle of the 23rd century. AS we move into the future, understanding the Klingons may keep us out of another such conflict.

WE have a mission simulation for you to undertake, that revisits one of the famous conflicts of that era. Join a task group to participate in that operation.

Participate in the Task Force Operation: Defense of Starbase One