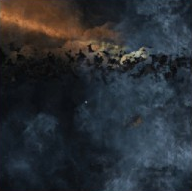 In The Ninth Rule, the player must deal with mercenaries working for the Ferengi Daimon Madran, as he steals mycelial spores from the Kinjer System to sell on the open market to the highest bidder.

There's a Starfleet distress signal coming from the Kinjer system. The U.S.S. Birmingham was investigating pirate activity in the area while on patrol.

There's a large concentration of spore colonies in that system. If pirates are in the spore business now, we have a new problem to deal with. We'd better see what's going on there.

Pirates. It's Harry Mudd all over again...

Out of all the Mycelial Operations, The Ninth Rule is the most random of the five released with Season Eighteen: Awakening. Two random sets of enemy mercenaries can attack the player at any time. It is possible for only one enemy faction to spawn twice in one playthrough of the patrol. The lists of mobs are as follows:

While under tractor tow by the player, Madran will also attempt to "bribe" the player with several different exotic items:

Stamets also has different quips for some factions the player encounters in the patrol:

Most of the enemy mobs have multiple combat quips as well: