Star Trek Online Wiki
Register
Don't have an account?
Sign In
Advertisement
in: Age of Discovery (episode arc), Missions for all factions, Rise of Discovery

Mission: The Plausibility of the Possible

The Plausibility of the Possible 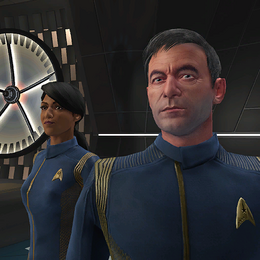 The Plausibility of the Possible is the first of two missions released with Rise of Discovery featuring Gabriel Lorca and Ellen Landry. It follows on from the aftermath of “Operation Riposte” and the capture of Priors World and Aakar.

Our victory at Priors World was hard-fought, and we took a thrashing in the process. We've gained some momentum from this win, but our position at Priors could become tenuous if the Klingons should return for a rematch.

Captain Gabriel Lorca of the U.S.S. Buran is on station at Priors World, and he's requested assistance while they handle mop up operations there. I believe you and your crew are ready for action, yes?

Lorca is a fine captain, tough but fair, with years of experience in the field. Follow his lead and you'll do well. Report to him at Priors World for further instructions.

Starfleet Command has commissioned another Historical Tactical Simulation, and they'd like you to evaluate it as soon as possible.

J'Ula and her agents were a force to be reckoned with during the war, and were a direct influence on a number of critical events that took place then. This simulation will put you in the midst of one such event. I look forward to seeing your results.

The Alliance has commissioned another Historical Tactical Simulation, and they'd like you to evaluate it as soon as possible.

You'll be dealing with J'Ula and her Mo'kai fanatics again. Despite their questionable honor, they were both feared and respected during the war with the Federation. As a result, they were a direct influence on a number of critical events. This simulation will put you in the midst of one such event. Fight well. You may be dealing with real Mo'kai warriors soon enough!

Jolan tru. I've contacted you to discuss a new Historical Tactical Simulation. Alliance researchers want to delve deeper into the tactics of J'Ula, and they'd like you to participate in the process.

The simulation will put you in the midst of an event heavily influenced by the actions of J'Ula. It takes place during a battle of considerable significance to both the Federation and the Klingons. I'm interested in seeing how a Republic officer of note approaches the challenges of this event.

Glory to the Founders, and the Dominion we all serve.

I have a new assignment for you. Alliance researchers have created another one of their clever tactical simulations, and they have humbly requested our participation in their initial studies. The Founders have graciously offered your services.

The simulation will place you into a historically significant event during the Federation-Klingon war. The Klingon warrior J'Ula and her agents played a significant role in this event. You'll be gaining more experience and understanding of her tactics, I'm sure.

The Founders expect your best efforts in this endeavor. Even in the case of a simulation, victory is life.

Go to Priors World and assist the U.S.S. Buran there.