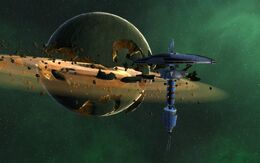 Toward Freedom is a short mission leading Romulan players to Starbase 39-Sierra or the First City of Qo'noS (depending on their allegiance) in order to begin working for their respective allies.

The battle with the Elachi is over and it's time to regroup with your fleet.

Starfleet has shared with us certain information regarding activities undertaken by the Empire. One of the outposts along the old border, Starbase 39-Sierra, keeps watch over Tal Shiar and Romulan Star Navy movements – at least, as much it can, given the preponderance of cloacking devices in the fleet.

Admiral T'Nae on Starbase 39-Sierra can give you further information. Report to her.

<name>, I know that Admiral T'Nae was not exactly pleasant to work with during the meeting at Khitomer. I've asked a few colleagues, and learned that past experiences have given her something of a ... grudge against Romulans.

Her attitude may have changed somewhat because of the actions of you and other officers allied with Starfleet, but don't expect her to be warm or welcoming.

And while it may be tempting to try to bait her, remember that the Republic and all of its people are counting on you. Thing of it as your chance to be more rational and diplomatic than a Vulcan.

A certain operative of Klingon Intelligence by the name of Temek has traded valuable information with us. Temek's people have kept tabs on the Tal Shiar for some time now, and he has indicated to us that he's seen signs of internal conflicts between the Tal Shiar and a significant faction of separatist – the Remans.

I need you to work with Klingon Intellgence on this. Get as much information as you can. You're in a better position to gather information in Star Empire space than a Klingon operative.

Temek will have more information for you when you meet him on Qo'noS. This is a great opportunity for the Republic to learn more about Tal Shiar activities, and possibly even to recruit the Remans to our cause.

Travel to Starbase 39-Sierra, in the Beta Quadrant, and meet with Admiral T'Nae for further instructions.

Travel to Qo'noS, in the Beta Quadrant, and meet with Temek in the First City for further instructions.

The mission is automatically solved and turned in, when the player shows up at the desk of Admiral T'Nae in her office at Starbase 39-Sierra, or approaches Temek in the Great Hall of the First City.