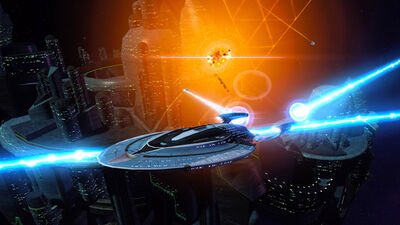 Vault: Ensnared is a 5-players space mission in which the Tholian Assembly attempts to capture The Vault in the Haakona System.

In the first part of the mission, players have five minutes to save as many Reman ships as they can (out of ten total) from around five Tholian ships each. The timer stops immediately if players manage to save all ten ships quickly and automatically advance to the next stage.

Obisek will then reveal that Tholian Vault Weavers are attempting to construct a massive Tholian Web around the Vault; if they succeed, they can initiate a reaction that will push the Vault out of our dimension to parts unknown. Players must hinder the Tholians' plan by destroying the Vault Weavers for seven minutes, after which the remaining ships will retreat. However, if players do not manage to prevent the Vault from being ensnared quickly, Obisek will trigger a thalaron cascade which will destroy the web but also deal serious damage to their ships.

A final Battle Group will then warp into the micro nebula, disabling shields and tactical view for players, lead by a Tholian Tarantula. Once this group is destroyed, the team will have the option to engage a named Tarantula nearby.

A Tholian invasion force has targeted the Vault and Obisek is calling for reinforcements. Team up with the Remans and defend the station before the Tholians spin their webs and carry the Vault into another dimension!

Prevent Tholian ships from constructing a web around the Vault.