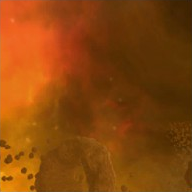 In Within the Briars, the player must brave deadly pockets of Metreon Gas in the Briar Patch to protect spore colonies from the agents of House Mo'Kai.

Starfleet's been reading a lot of Klingon ships operating near the Briar Patch. Normally, I wouldn't be too concerned, but there's a spore colony in there. If any of those Klingon ships belong to House Mo'Kai, then J'Ula might have a harvesting operation in there too.

Dangerous as it is, I think we need to go see what's going on inside the Briar Patch.