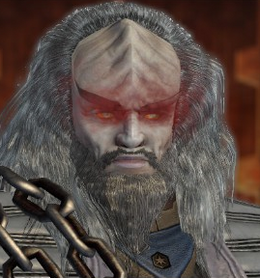 In Klingon mythology, Molor was the tyrannical ruler of Qo'noS approximately 1,500 to 1,600 years ago. Molor was said to be so powerful that only one man could stand against him: Kahless the Unforgettable. Molor led an army in a war against Kahless, but wielding his newly forged sword, Kahless defeated Molor and banished him to Gre'thor. The men that were Molor's soldiers were reborn in Gre'thor as the Fek'Ihri.