The Na'kuhl are a humanoid, warp-capable species from the Na'kuhl System in the Alpha Quadrant. They are isolationists, preferring to stay out of galactic affairs, but are rumored to have relations with the Breen Confederacy.

By the 29th century the Na'kuhl had become the most dangerous faction in the Temporal Cold War and were violently opposed to the Temporal Accords, trying to alter historical events several times in order to improve the standing of their own race. The Na'kuhl were led by a fanatic called Vosk.

At some point during the Cold War, the Na'kuhl shared knowledge about the future with selected 22nd century Klingons in the hopes of gaining their allegiance. However, the Klingons did not obey their commands and instead used the information to their own advantage. Among said information was the location of an ancient doomsday weapon.

The Na'kuhl revealed the Doomsday Machine's location to Klingons in the 22nd century.

By the 25th century knowledge about the future Na'kuhl was mostly shrouded in mystery. Only few Klingons had access to the Na'kuhl's information, among them B'vat. In 2409 B'vat's forces located the Doomsday Weapon in the T'Ong Nebula. He was able to capture and control the device and hid it in the Imaga System. B'vat planned to use it on an unknown Federation world, killing millions and further nurturing war and hate between the Klingon Empire and the Federation. B'vat was only stopped when his former aide K'Valk defected and told Starfleet about his agenda. ( “The Doomsday Device”)

In 2410, the Tholians use the Tox Uthat they previously stole from time traveling scientist Kal Dano to stop all fusion in the central star of the Na'kuhl System. The Na'kuhl are infuriated but demand to deal with the catastrophe on their own. ( “Stormbound”)

In 2769, the Na'kuhl have sent representatives to protest the signing of the Temporal Accords. In the middle of the confusion created by Noye and other Krenim insurgents, Na'kuhl starships try to take down the Temporal Sensor Array which would allow them to move through time undetected. They are stopped by the player and a fleet of temporal starships. ( “Time and Tide”)

A number of Na'kuhl, including Vosk, were stranded on an alternate 20th century Earth after escaping capture by the 31st century Federation via a temporal conduit which allowed the Na'kuhl one-way stealth time travel. They reconstructed the temporal conduit after enlisting the help of Nazi Germany and traveled to the 31st century where they defeat the Federation, the Cold War turning 'hot' as a result. This creates the alternate timeline in which Vosk and his group arrived, forming a predestination paradox. However, the Earth starship Enterprise was sent back in time to stop the Na'kuhl from escaping the 20th century, eventually succeeding and restoring history to normal. 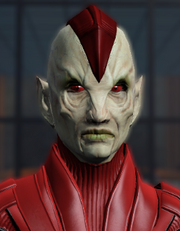 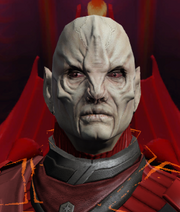 Although the Na'kuhl of the 25th century own only a few starships, by the 28th century they are major players in the Temporal Cold War and a force to be reckoned with.