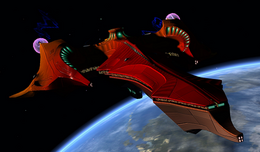 This article is for the playable starship. For the NPC vessel, see Acheros Battleship.

The Na'kuhl Acheros-class Battlecruiser is a Tier 6 Battlecruiser which may be flown by characters of any faction. This starship can be used from any level upon completion of the tutorial experience. As you level up, this ship gains additional hull, weapon slots, and console slots.

Players can obtain this starship as a ultra rare drop from the [Infinity Lock Box]; it comes in an [Infinity Prize Pack - T6 Ship] choice package, which is bound to you until a ship is chosen. It can also drop from the older [Na'kuhl Lock Box]. The boxed ship is not bound and so may be traded to other players or bought and sold on the Exchange for energy credits under the name [Special Requisition Pack - Na'kuhl Acheros Battlecruiser [T6]].

The foreboding silhouette of the Acheros-class Battlecruiser was designed to instill fear into those that behold it. This agile battlecruiser is capable of appearing out of nowhere to deliver a devastating barrage of weapons fire, thanks to its ability to use Battle Cloak.

This console is part of the Na'kuhl Plasma Technologies Set, which also includes [Console - Universal - Temporal Distress Beacon], and [Console - Universal - Plasma Discharge Array] obtainable with other Na'kuhl T6 starships, but also equippable on the Acheros Battlecruiser. For each console added after the first, an additional passive bonus is unlocked.

The Na'kuhl Acheros-class Battlecruiser has a battle cloak that allows the ship to cloak during combat, granting stealth and a damage bonus upon decloaking.

By using an [Experimental Ship Upgrade Token], the Na'kuhl Acheros-class Battlecruiser may be upgraded to T6-X, unlocking an extra ship device slot, universal console slot, and the ability to slot an extra starship trait.