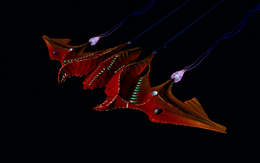 This article is about the playable starship. For the NPC vessel, see Tadaari Frigate.

The Na'kuhl Tadaari-class Raider is a Tier 6 Raider which may be flown by characters of any faction. This starship can be used from any level upon completion of the tutorial experience. As you level up, this ship gains additional hull, weapon slots, and console slots.

Players can obtain this starship as a very rare drop from the [Infinity Lock Box]; it comes in an [Infinity Prize Pack - T6 Ship] choice package, which is bound to you until a ship is chosen. It can also drop from the older [Na'kuhl Lock Box]. The boxed ship is not bound and so may be traded to other players or bought and sold on the Exchange for energy credits under the name [Special Requisition Pack - Na'kuhl Tadaari Raider [T6]].

Na'kuhl ships are known for their speed, agility and ability to cloak. No ship in the Na'kuhl fleet represents this better than the Tadaari Raider. These Raiders employ hit and run tactics by combing their incredible speed and Battle Cloaking technology.

The Na'kuhl Tadaari-class Raider has a battle cloak that allows the ship to cloak during combat, granting stealth and a damage bonus upon decloaking.

The Na'kuhl Tadaari-class Raider comes with an Experimental Weapon slot. This additional slot does not fit standard weapons. Unlike standard starship weapons, Experimental weapons are not affected by weapon firing modes, such as those granted by bridge officer abilities.

By using an [Experimental Ship Upgrade Token], the Na'kuhl Tadaari-class Raider may be upgraded to T6-X, unlocking an extra ship device slot, universal console slot, and the ability to slot an extra starship trait.