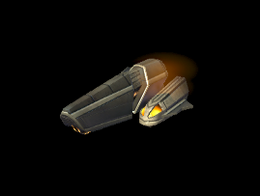 The Naga Fighter is a small lightweight fighter vessel of Gorn design. Like Romulan Scorpion Fighters they can operate independently, albeit within reach of a Gorn fleet. Weaponry and technical specifications match the Orion Syndicate's Interceptor. They can inflict significant damage over time.

The Naga Fighter does not display any special powers.