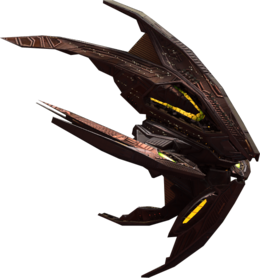 The Nausicaan Scourge-class Destroyer is a Tier 4 (Level 30) Destroyer which may be flown by Klingon Defense Force characters, including Klingon Empire-aligned Romulan Republic and Dominion characters. All faction restrictions of this starship can be removed by having a level 65 KDF character or by purchasing the Cross Faction Flying unlock from the Zen Store.

under the name Scourge Destroyer. This ship was previously available on its own from the Zen Store; players that purchased it from there can still reclaim it from there on all their characters.

Nausicaans focus on strength and firepower. They tend to design their ships with vertical, rather than horizontal, orientation and the Scourge class is no different.

The Scourge-class Destroyer is as ruthless as it is elegant.

The following table compares the Scourge Destroyer with other low tier Nausicaan destroyers.

20
+8 TAC per SciShip or TacShip
Community content is available under CC BY-NC-SA 3.0 unless otherwise noted.
Advertisement