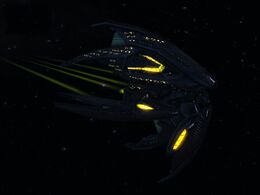 The Nausicaan Scourge-class Destroyer Retrofit is a Tier 5 (Level 50) Destroyer which may be flown by Klingon Defense Force characters, including Klingon Empire-aligned Romulan Republic and Dominion characters. All faction restrictions of this starship can be removed by having a level 65 KDF character or by purchasing the Cross Faction Flying unlock from the Zen Store.

Nausicaans focus on strength and firepower. They tend to design their ships with vertical, rather than horizontal, orientation and the Scourge class is no different. The Scourge-class Destroyer is as ruthless as it is elegant.

For players looking for an alternative to the Somraw-class Raptor Retrofit, the Scourge class Destroyer Retrofit is a good choice. In spite of lower Hull Strength, lower weapons power and lack of Cloak, it has higher Shield Strength, an identical Bridge Officer setup, more engine power and a slightly better Turn Rate. Notably, the Scourge class is considerably weaker in durability than the Guramba-class Siege Destroyer, with lower Hull and Shields, and also lacking that ship's Disruptor Javelin.

The Nausicaan Scourge-class Destroyer Retrofit comes with an Experimental Weapon slot. This additional slot does not fit standard weapons. Unlike standard starship weapons, Experimental weapons are not affected by weapon firing modes, such as those granted by bridge officer abilities.

Following table compares the Scourge with other Tier 5 KDF Destroyers.