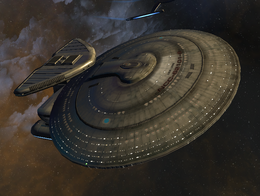 The Nebula-class Science Vessel is a Starfleet vessel. Science vessels are not as hard-hitting as escorts or cruisers, but perform excellently in a support role. They have the strongest shields of any cruiser-level ship.

Nebula-class starships are similar to Federation Science Vessels, however they come with a Tachyon Detection Grid, which detects cloaked ships.

This is the NPC version of the Advanced Research Vessel Retrofit.

Nebula Class Science Vessels can spawn in almost any encounter involving one or more random cruiser-level Federation ships. Each one is labeled U.S.S. Nebula by default.