New Romulus (also known as Dewa III, Vastam, and Mol'Rihan) is the third planet in the New Romulus System and the capital of the Romulan Republic. Its accessible surface is an adventure zone, with the capital city also being home to the Fleet Embassy as well as New Romulus Command.

Due to the destruction of Romulus in 2387, and as a counter weight to the Tal Shiar and Sela's deceitful Star Empire governed from Rator III, Romulans and Remans under D'Tan’s Unification and Obisek’s Resistance declared Mol'Rihan to be the new capital planet of a peaceful and honest Romulan civilization in 2409.

Records indicate that the colony ships that left Vulcan after the Sundering spent several months on this planet. Mostly abandoned since then, this M-class world is now the home of New Romulus, a colony made of Romulans and Remans seeking to create a new society and a new homeworld.

Radiation levels and seismic instability on the planet indicate that there was a world-wide cataclysmic event in the world's distant past. It will take more study to determine exactly what happened.

The Embassy on New Romulus

New Romulus Command and the Fleet Embassy are also located on New Romulus, but are not part of the adventure zone.

The Staging Area also offers a direct access to the New Romulus Fleet Embassy, and to New Romulus Command for Romulan Republic players. 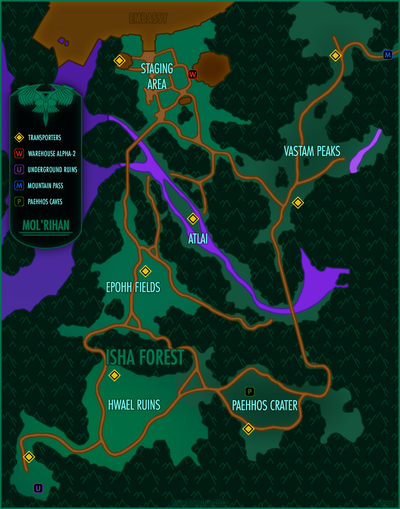 Numerous accolades can be obtained on New Romulus: