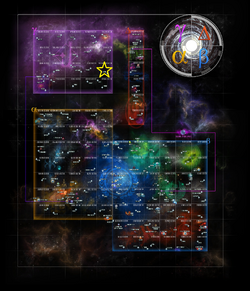 The New Yadera System is a system in the New Yadera Sector of the Gamma Quadrant. Following the conquest of Yadera Prime by the Dominion around 2340, a refugee named Rurigan established a new colony on this world. However he was alone so, seeking the comfort of his people, he used a holographic generator to create a colony of sentient Photonic lifeforms. The colonists only learned they were photonic when Dax and Odo helped repair their malfunctioning generator, but Dax and Odo agreed to hide the fact that Rurigan was not also a hologram like his creations. ("Shadowplay")