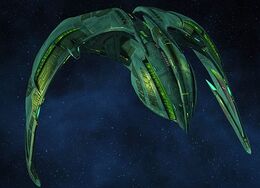 The Nijil-class Operations Miracle Worker Warbird is a Tier 6 Warbird Battlecruiser which may be flown by Romulan Republic characters, as well as characters of any other faction. All faction restrictions of this starship can be removed by having a level 65 KDF character or by purchasing the Cross Faction Flying unlock from the Zen Store. This starship can be used from any level upon completion of the tutorial experience. As you level up, this ship gains additional hull, weapon slots, and console slots.

The Nijil-class Miracle Worker Warbird is named after Nijil - a pioneer in the development and utilization of neural interfaces. Although this technology that has a mixed reputation with some modern Romulans due to its abuse by the Tal Shiar, it is nonetheless still in widespread use and has many beneficial applications.

The Nijil-class Operations Miracle Worker Warbird has a battle cloak that allows the ship to cloak during combat, granting stealth and a damage bonus upon decloaking.

As a Romulan Warbird, the Nijil-class Operations Miracle Worker Warbird comes with built-in Singularity abilities. These abilities do not automatically rank up when acquiring higher tier Warbirds. These powers build in severity based on the charge built up by the ship's Singularity Core.

As a Miracle Worker vessel, the Nijil Operations Miracle Worker Warbird is fitted with a versatile Universal Console equipment slot which can hold any Engineering, Science, Tactical, or Universal console. This is an additional Console slot, above and beyond the standard allotment for ships of the same Tier.

By using an [Experimental Ship Upgrade Token], the Nijil-class Operations Miracle Worker Warbird may be upgraded to T6-X, unlocking an extra ship device slot, universal console slot, and the ability to slot an extra starship trait.