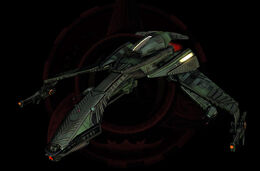 The Ning'tao-class Bird-of-Prey is a Tier 3 (Level 20) Raider which may be flown by Klingon Defense Force characters, including Klingon Empire-aligned Romulan Republic and Dominion characters. All faction restrictions of this starship can be removed by having a level 65 KDF character or by purchasing the Cross Faction Flying unlock from the Zen Store.

The Ning'tao-class Bird-of-Prey offers a significant improvement over the standard Norgh-class Raider. The new Ning'tao-class Refit was built with a split wing design to accommodate its Quad Cannons.

The Ning'tao-class Bird-of-Prey has a battle cloak that allows the ship to cloak during combat, granting stealth and a damage bonus upon decloaking.

The Ning'tao Bird-of-Prey comes equipped with the [Disruptor Quad Cannons [Dmg]x4] which draw power from ship's engines to deal massive damage. These cannons scale with the player and may be equipped on any ship supporting cannons. However, only one Quad Cannon may be equipped per ship.

The Hangar pet version of the Ning'tao can be unlocked for use on any Full Carrier - any vessel with two Hangar bays.