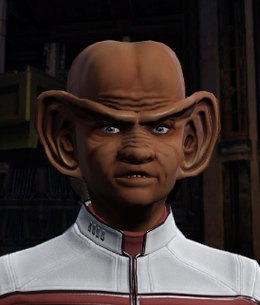 Captain Nog is a Ferengi Starfleet officer commanding the U.S.S. Chimera. He is also the son of Rom, current Grand Nagus of the Ferengi Alliance.

Nog was raised by his father, Rom, aboard Deep Space 9. As a boy, he worked in his Uncle Quark's bar. He later became the first Ferengi to join Starfleet, and returned to the station to serve as a Cadet, and later an Ensign.

Nog was involved in several battles during the Dominion War, including the Siege of AR-558, Operation Return, and the Battle of Cardassia. He was wounded in action on AR-558, losing a leg during the fighting there. By the end of the war in late 2375, his service had earned him a promotion to Lieutenant Junior Grade which was delivered by Captain Benjamin Sisko in one of the Captain's last official acts as commanding officer of DS9.

When Geordi La Forge left the U.S.S. Enterprise-E to command the U.S.S. Challenger in 2397, Nog became the new Chief Engineer of the Enterprise. He was seen as an example to many Ferengi, and the 2396 class at Starfleet Academy included four Ferengi cadets.

By 2409, Nog has been promoted to Captain and given command of the U.S.S. Chimera.

In the 32nd century, the Eisenberg-class U.S.S. Nog will be named in the captain's honor.