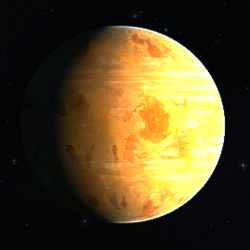 Panorama of the surface

Nukara Prime is an inhospitable "Demon" class planet, the second in the Nukara System of the Boreth Sector.

Surface temperatures exceed 500 Kelvin and the atmosphere is saturated with sulfur and thermionic radiation, thereby requiring all personnel to wear an Environmental Suit at all times.