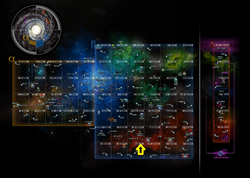 The Nukara System is a star system in the Boreth Sector of the Beta Quadrant. The fourth planet harbors an indigenous pre-warp civilization.

The Nukara system is a binary star system with twin Class K stars and six planets. Of those, two are of interest to scientists.

Planetary surveys have found a primitive civilization on Nukara VI[sic] equivalent to Earth's Stone Age. The Federation Science Concil has deployed sensor arrays to observe the Nukarans, but all requests for observer blinds or other close studies have been denied out of fear of contaminating the fragile culture. The planet is currently under Federation quarantine.

Nukara Prime is a Y-Class or "demon" planet. Located in close orbit of the twin stars, surface temperatures on Nukara Prime can exceed 500 K. Its atmosphere is saturated with sulfur and thermionic radiation, and the plumes of radiation are so intense they can affect starships in orbit. In addition, interspacial rifts have been detected on the surface. Additional study will be required to determine the extent of this phenomenon.

The system contains at least four planets, one of which is the inhospitable Class Y planet Nukara Prime. Nukara IV, however, is habitable and home to an Iron Age civilization, the Nukarans.