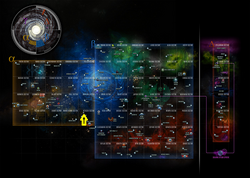 The Obrom System is a system located in the Betazed Sector.

Obrom II is a Federation colony with a population of approximately 25,000. The planet was occupied by Jem'Hadar forces during the Dominion War, and Starfleet is still attempting to determine the whereabouts of more than 300 residents who were sent to Dominion prison camps in the Gamma Quadrant.