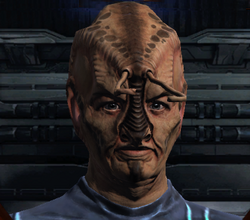 The Octanti (known to the Borg as Species 6339) are a technologically advanced humanoid species from the Delta Quadrant.

In 2371, the Borg Collective began to assimilate the Octanti. Despite their resistance, 11 billion Octanti had been assimilated before the U.S.S. Voyager made first contact with survivors in 2375. Similar to the Brunali, the Octanti used engineered viruses to fight the Borg, which they introduced into the Collective by having members of their own species willingly assimilated.

By 2410, their numbers were still dwindling but the Octanti were committed to kill all Borg, including such that were liberated and part of the Cooperative.

The Octanti remain committed to their quest, attacking Borg vessels wherever they find them. Their ships are equipped with advanced phaser technology which allows them to hold their ground in battles against the Collective.