This article is about the Tier 3 playable starship. For other uses, see Olympic class.

The Olympic-class Research Science Vessel is a Tier 3 (Level 20) Science Vessel which may be flown by Starfleet characters, including Federation-aligned Romulan Republic and Dominion characters. All faction restrictions of this starship can be removed by having a level 65 KDF character or by purchasing the Cross Faction Flying unlock from the Zen Store.

Players can obtain this starship from any Ship and Shuttle Requisitions officer for 5,000 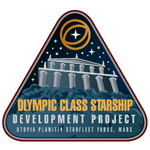 All three classes of the Research Science Vessel are very distinct in appearance. They have, unlike most Starfleet vessels, a spherical main hull rather than the typical saucer style and their pylons which lead to the nacelles are connected to the fore section of the secondary hull in an up-swept fashion. The nacelles are also very long, typically spanning the full length of the secondary hull.