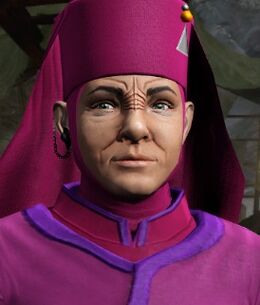 Kai Opaka was the former Kai of Bajor until 2369 when she was forced to remain in the Gamma Quadrant. She was reelected Kai upon her return to the Alpha Quadrant in 2410.

Opaka was born on Bajor during the occupation and became a revered figure among her people. Opaka was the first to identify Benjamin Sisko as the Emissary of the Prophets and gave him an orb that led to the discovery of the Bajoran Wormhole. ("Emissary")

Opaka asked to travel through the wormhole and encouraged Sisko (accompanied by Kira Nerys and Julian Bashir) to investigate a moon of the Olt System in the Gamma Quadrant. On arrival, the moon's satellite grid attacked the runabout, causing it to crash on the surface. Opaka ostensibly died on impact, but was later revived by artificial microbes on the planet. ("Battle Lines", “Armistice”)

The microbes had been designed to keep two warring groups of prisoners (the Ennis and the Nol-Ennis) alive. However, once revived the body becomes dependent on the microbes meaning Opaka and the prisoners could not be evacuated without killing them. Opaka remained as the crew left, hoping to bring peace between the two warring groups. ("Battle Lines")