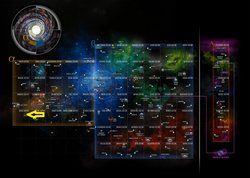 The Orias System is a system located in the Orias Sector of the Alpha Quadrant.

Only one out of six planets is settled upon. Although the system is located within the Cardassian Union it is claimed by the neutral New Link and their servants/allies, the Alpha Jem'Hadar. The system is quarantined by Starfleet since 2409.

The Orias system has six planets. Of those worlds, one is M-Class. Orias III is uninhabited, and for decades was used by the Obsidian Order for training exercises and as a detention site. In 2371, the order used the system as the location of a fleet intended to enter the Gamma Quadrant and attack the Founders' Homeworld. The attack failed, and the Obsidian Order ships were destroyed by a Jem'Hadar counterattack.