This article refers to the Orion species. You may instead be looking for the faction Orion Syndicate 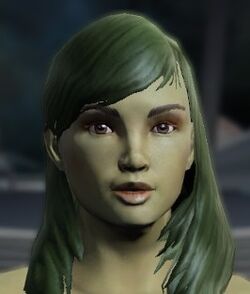 The Orions are a green skinned humanoid race. They are now part of the Klingon Empire after being conquered. They are a playable race in Star Trek Online, and a selection of their vessels are available for players from the C-Store.

Both Orion males and females are tall, have distinguishing green skin, and features considered attractive to others. Orion males are often bald and have a muscular physique from physical labor. Orion females, other than their green skin, are near identical to Human females.

Orion females have very potent pheromones they may consciously control. They are more than capable of seducing males of most species, with a few exceptions (such as Vulcan males). Females are much less susceptible to this and in Human females this often produces headaches. Due to these remarkable pheromones the Orion females are known to be the dominant ones in Orion relationships, society, and the organized crime cabal known as the Orion Syndicate.