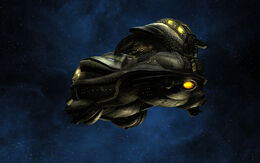 This article is about the playable starship. For the NPC vessel, see Marauder Battleship.

The Orion Marauder-class Flight Deck Carrier is a Tier 5 (Level 40) Flight Deck Carrier which may be flown by Klingon Defense Force characters, including Klingon Empire-aligned Romulan Republic and Dominion characters. All faction restrictions of this starship can be removed by having a level 65 KDF character or by purchasing the Cross Faction Flying unlock from the Zen Store.

under the name Marauder Patrol Cruiser.

The Orion contribution to the Klingon Defense Force fleet are their Flight Deck Carriers, a hybrid Cruiser/Carrier class that allows the versatility of a powerful Cruiser while carrying extra man power for fighter deployment.

The Orion Syndicate is allowing the KDF access to the designs of its famed Marauder class.

These shuttles are equipped with Disruptor Pulse Cannons, and can use Boarding Party to inflict more damage to an enemy target by disabling its subsystems or increasing abilities' recharge time.

The Advanced variant of the Marauding Force Assault Shuttles can be obtained from the Dilithium Store, while the Elite variant is obtainable from the Fleet Starbase with unlocked Tier V Communications Array.

By using an [Experimental Ship Upgrade Token], the Orion Marauder-class Flight Deck Carrier may be upgraded to T5-X, unlocking an extra ship device slot, universal console slot, and the ability to slot an extra starship trait.