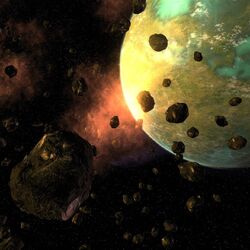 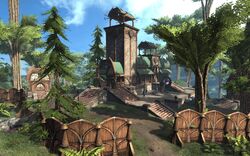 P'Jem is a Class M planet located in the P'Jem System, and the site of a sacred Vulcan monastery.

The original P'Jem monastery was established at least 3,300 years ago, even predating the Time of Awakening on Vulcan.

In 2151, the Andorians became suspicious that P'Jem was home to a secret surveillance station in violation of their treaty with Vulcan. This was eventually proven correct by Andorian Commander Thy'lek Shran and Captain Jonathan Archer of the Enterprise NX-01. In 2152, the Andorian Imperial Guard bombarded P'Jem from orbit and destroyed the monastery. The monks and personnel working there were given time to evacuate, however.

The monastery was rebuilt by a coalition of humans, Andorians and Vulcans in 2170, following the foundation of the United Federation of Planets.