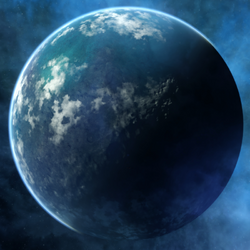 An overlook from a Pahvan meadow

Pahvo is a forested planet in the Pahvo System that is known for its collective, planetary-wide consciousness. An attempt by the crew of U.S.S. Discovery to use its transmitter to aid Starfleet during the Federation-Klingon War of 2256-57 was unsuccessful. By 2410 the planet is a protected reserve and hosts a Vulcan research team led by Chief Scientist Somat.

The planet's consciousness lives in total harmony with its world; and its transmitter is its attempt to spread its belief in peace. Its mirror universe counterpart, on the other hand, is a cruel, deadly entity that destroys anything that approaches it. To be sent to Pahvo, is to be sent to die.

Discovered by Vulcans in the 21st century, the planet Pahvo is a great, unified consciousness that resonates with the music of a planetary awareness, humming through a crystal transmitter that broadcasts its signal into space - a signal that has never been decoded. Despite centuries of research, the planet's signal remains a mystery, and communication with its indigenous life tenuous at best.