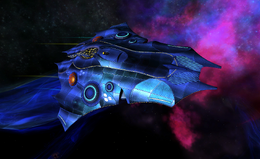 This page is for the playable starship. For the NPC vessel, see Temporal Dreadnought.

The Paradox-class Temporal Dreadnought is a Tier 6 Science Dreadnought which may be flown by characters of any faction. This starship can be used from any level upon completion of the tutorial experience. As you level up, this ship gains additional hull, weapon slots, and console slots.

. The boxed ship is not bound and so may be traded to other players or bought and sold on the Exchange for energy credits under the name [Special Requisition Pack - Paradox Temporal Dreadnought [T6]].

This ship could also be purchased as an account-unlock from the Zen Store as a possible choice from the Mudd's Choice Pack of Dread! as part of "Mudd's Market", available from November 20, 2020. Like all items in the Market, the Bundle periodically goes on massive discounts (upwards of 75% during special promotional sales).

The Paradox Temporal Dreadnought is the most feared vessel in the Terran Empire fleet. It boasts technology from the Mirror Universe's distant future which allows it to be massive and agile without sacrificing durability.

This ability is part of the Temporal Fragmentation System Set, which also includes [Console - Universal - Manheim Device] and [Console - Universal - Tipler Cylinder]. These consoles are obtainable with other Temporal vessels, but can also be equipped on the Paradox Temporal Dreadnought. For each console added after the first, an additional passive bonus is unlocked.

The Paradox Temporal Dreadnought can also unlock Rozhenko Timeships, if the player is a member of the Klingon Defense Force.

By using an [Experimental Ship Upgrade Token], the Paradox-class Temporal Dreadnought may be upgraded to T6-X, unlocking an extra ship device slot, universal console slot, and the ability to slot an extra starship trait.