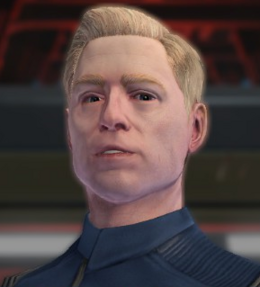 You may be looking for Paul Stamets (hologram).

Paul Stamets was an astromycologist and Starfleet officer serving during the mid-23rd century.

Paul Stamets, together with Justin Straal, developed the spore drive technology and was a leading researcher investigating the Mycelial network. From 2256 to 2257 he served aboard U.S.S. Discovery under captains Gabriel Lorca, Philippa Georgiou, and Christoper Pike.

Stamets' scientific discoveries were used to end the Federation Klingon War of the mid-23rd century. Following the presumed destruction of Discovery in 2257, much of Stamets' life and research was classified by Starfleet Command.