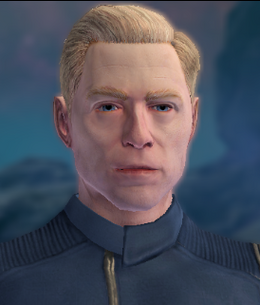 Paul Stamets is a holographic recreation of the 23rd century astromycologist Paul Stamets, who served aboard the U.S.S. Discovery developing the spore drive. The program was initially created by the player and Captain Sh'marois aboard the U.S.S. Hofmann using Starfleet classified data, but was augmented with spores on the advice of the jahSepp.