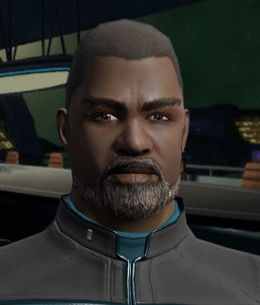 Temporal Agent Philip Crey is a Human Starfleet Science officer found at Earth Spacedock. He serves as a guide to players during the Delta Recruitment Event.

Crey was among the crew of the U.S.S. Bozeman, trapped in a temporal distortion in the Typhon Expanse for 90 years, making him 157 years old in 2409. He accepted a position with the Temporal Intelligence Agency, where his first-hand knowledge of the past is an asset.