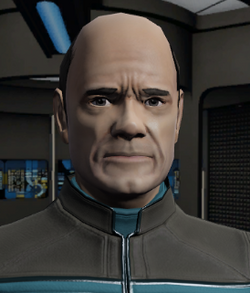 Photonics, or photonic lifeforms are a non-playable lifeforms based on photons, particles of light and energy (constructs generally termed 'Holograms', although that includes non-sentient objects also). They range from sentient lifeforms serving in Starfleet (such as The Doctor) to more basic programs which are the property of individuals (such as Holo Leeta).

Photonic life forms are sentient holograms generated by computer. They are composed of photons, forcefields and holomatter, emitted by holographic projectors. Holograms can only exist in the presence of some form of emitter technology; traditionally this meant holo emitters built into rooms but now also includes mobile emitter technology.

While most Photonic lifeforms encountered are artificially-created holograms, naturally occurring Photonic species have been encountered. (Heroes and Demons, Bride of Chaotica!, The Voyager Conspiracy)

Holographic technology has been used by species as far back as the 22nd century (Unexpected) and by the Federation in a crude from by at least the 23rd century. (Lethe) The first advanced form of holographic characters were developed during the mid-24th century as holodecks became more common; most notably with the character of Moriarty on the U.S.S. Enterprise who gained sentience and held the ship hostage in a bid for freedom. Moriarty was eventually tricked into a self-contained holodeck simulation (Elementary, Dear Data, Ship in a Bottle) Civilian use later included holograms that were aware of their nature, for example Vic Fontaine who referred to himself as a "light bulb" and had some power over his own program. (His Way)

The Federation began more practical applications of Photonics, notably with the Emergency Medical Hologram (EMH), developed by Lewis Zimmerman. While most Mark I EMH programs were reassigned to dilithium mining (superseded by new EMHs and a planned Long Term Medical Hologram), one The Doctor on the U.S.S. Voyager gained sentience due to his unforeseen prolonged activation. This sentience was not formally recognised by the Federation, but he was accorded some rights when The Doctor's publisher released the Doctor's work "Photon's Be Free" without his permission. The Doctor's new limited recognition, and the incendiary nature of his work among enslaved Photonics, potentially spearheaded Photonic rights. (Life Line, Author, Author)

Voyager's time in the Delta Quadrant also introduced holographic technology to the Hirogen who used it as an alternative to hunting biological life and settle in one area. However their Photonics became sentient and initiated a rebellion. The Photonics were torn between waging a campaign against biologicals or finding an isolated colony. (Flesh and Blood)

During an incident that involved Voyager encountering 29th century technology, the Doctor obtained a mobile emitter which allowed him to finally leave the holo-emitter equiped sickbay and travel anywhere. It was however sufficiently advanced that it could not be duplicated by Voyager's crew. (Future's End) Following The Doctor’s return from the Delta Quadrant, Starfleet ordered the transfer of his mobile emitter from the Doctor to a research facility. The Doctor filed a legal injunction to prevent this, seeing it as essential to his personal freedom, triggering a court case. The Soong Foundation supported the Doctor’s quest for legal recognition and began work on their own mobile emitter technology. (Path to 2409)

The Judge Advocate Office argued that the prior decision on Data’s rights merely supported that the Doctor was not Starfleet property, not that he was a sentient being. The Doctor’s case expanded into a class-action suit for all Photonics and other forms of artificial life in the Federation. Photonic rights were opposed by holonovel publishers and programmers who argued that appearing sentient did not prove them to be sentient. The courts agreed that the rights could not apply to all holograms and a definition and test of sentience was needed. The Federation Supreme Court finally ruled that the Doctor was sentient and set out the standard which a Photonic must meet to be considered sentient. Any that cannot meet those standards would be considered the property of their creators or owners. (Path to 2409)

The debate was complicated by the discovery that the hologram Moriarty was still held on a Starfleet computer. Starfleet cited him as a security risk so must be held in indefinite custody. The Soong Foundation argued that this amounted to imprisonment without trial. The Soong Foundation subsequently sued for an injunction forcing Starfleet to reveal the conditions and locations of all its Photonics. Starfleet viewed this as an invasion of officer’s privacy. (Path to 2409)

As decided by the Federation Supreme Court in 2394 (see History above), a Photonic lifeform must pass certain conditions to be granted any rights as a sentient being. Until then, they are considered the property of their creators. Holographic rights are supported by the Soong Foundation (which is affiliated with the Daystrom Institute).

Outside the Federation, notably among the Ferengi, Photonics are often seen as property with holograms such as Gein and Holo Leeta serving in an unpaid commercial capacity. The Hirogen are known to maintain their interest in photonics as a form of prey.

Among other powers, Photonics are known to serve in the crews of the Romulan Republic, Klingon Empire and Dominion but their exact legal status with these powers is unknown.

Photonics have been designed to serve in a wide variety of roles. For example. The Doctor who serves as a physician, Gein who is a maintenance engineer for hazardous environments, Rivv Enda, who is a freelancer holonovel author, and Varna who is an 'entertainer'. Sentient holograms are known to try to exceed the sum of their programming, notably The Doctor's interests in art and music.

New Yadera is a photonic colony in the Gamma Quadrant set up by a refugee from Yadera Prime in the 24th century. Later in the 24th century the U.S.S. Voyager encountered a group of Photonics in the Delta Quadrant attempting to found a colony, although the end result of their quest is unknown.

By 2409, a group of photonic lifeforms had founded a colony in the Ra'kholh System lead by Doctor Marius, a former Starfleet EMH Mark I. He was liberated from a dilithium mine in Federation space with the help of activists from the Soong Foundation. The colony has come under attack from both Hirogen and Elachi.