This article is about mirror universe counterpart of the player. For the player themself, see Player character. 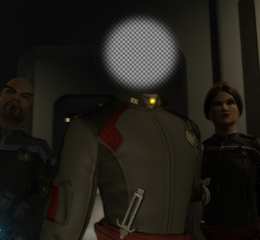 The player character has a counterpart in the Mirror Universe, nicknamed "the Inquisitor", serving in the fleet of the Terran Empire and commanding officer of the I.S.S. Defiant in 2411.

They are the equivalent of the player's own character in appearance, however, they universally hold the rank of Captain regardless of the players' ranks. They are in a Terran Uniform and have a small electronic device on their throat, serving as a vocalizer after they lost their vocal cords due to an assassination attempt by Mirror Tilly.