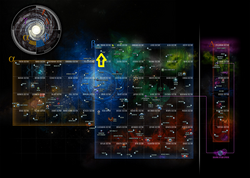 The Ponor System is a system located in the Ponor Sector of the Beta Quadrant.

A Class-F planet with a diameter of 14,447 km, Ponor II is categorized as extremely hazardous, and Class 4 seismic disturbances are common. Volcanic eruptions can ignite the hydrogen compounds in the atmosphere, creating massive fireballs that can destroy large areas with almost no warning. Away team missions to the planet are forbidden without approval from Starfleet Command.