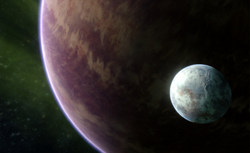 The frozen surface of Priors 5d

Priors 5d is a moon in the Priors System with a breathable atmosphere, and a harsh, polar climate.