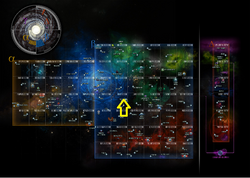 The Priors System is a Federation system near the Klingon border. The system is subject to frequent ion storms.

Priors World is a class-M world close to the heart of Federation space in the Beta Quadrant. In the 23rd century, it was subject to frequent attacks by Klingons due to its position close to the Empire's border. The Priors system, which holds several planets, suffers occasional ion storms due to the star's instability.