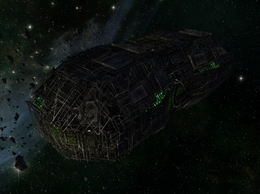 The Borg Probe fills the role of a frigate in the Borg Collective. It is more heavily armored and equipped than comparable vessels from other factions, however it does not appear to have any abilities. The ship is roughly equivalent to a Federation Frigate or Klingon Bird-of-Prey.