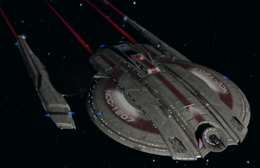 This article is about the lower level ship variant. For the improved T6 starship, see Walker Light Exploration Cruiser.

The Prototype Walker-class Light Exploration Cruiser is a Tier 4 (Level 1) Cruiser which may be flown by Starfleet characters, including Federation-aligned Romulan Republic and Dominion characters. All faction restrictions of this starship can be removed by having a level 65 KDF character or by purchasing the Cross Faction Flying unlock from the Zen Store. This starship can be used from any level upon completion of the tutorial experience. As you level up, this ship gains additional hull up to Level 30 is reached.

Players can obtain this starship from the Zen Store for 1,500

under the name Prototype Light Exploration Cruiser. This ship can be purchased individually, or as part of the Age of Discovery Starter Pack for 1,500

. It is also available as part of the following: Discovery Operations Pack for 12,000

This starship's hull strength scales with the player's level.

In 2221, when ships of this class first entered service, the Walker-class Prototype Light Exploration Cruiser was considered to be one of the powerhouses leading the Federation into the future, designed to be effective in as wide a variety of missions as Starfleet needs.

However, by the beginning of the Federation-Klingon War, only a small number of Walker-class starships were still in active service, while the majority of them had already been decommissioned. With the sudden escalation of full scale war with the Klingon Empire, the Admiralty began evaluating all of its mothballed hulls to determine how quickly they could be readied for active service. At the top of the list to be re-activated were the existing reserve of Walker-class starships.

Per Admiral Cornwell's instructions, these ships have been offered to junior officers ready for their first command.

Following table compares all Tier 1 and Tier 4 Federation Cruisers available to players, due to its scaling nature.