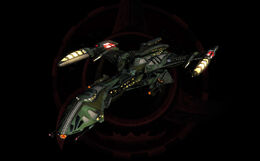 The Puyjaq-class Raptor is a Tier 4 (Level 30) Raptor which may be flown by Klingon Defense Force characters, including Klingon Empire-aligned Romulan Republic and Dominion characters. All faction restrictions of this starship can be removed by having a level 65 KDF character or by purchasing the Cross Faction Flying unlock from the Zen Store.

under the name Puyjaq Class. This ship can be purchased individually, or as part of the console-only Klingon Empire Pack for 4,000

. It is also available as part of the following: console-only All Faction Mega Bundle for 8,000

When the Klingon Empire finds a ship design that works, they make multiple variations intended for differing battle scenarios. The Puyjaq-class Raptor is a variation of the Pach-class Raptor that can support a fleet maneuver or slow multiple opponents.

The Puyjaq-class Raptor has a cloak that allows the ship to cloak when not in combat, granting stealth and a damage bonus upon decloaking.