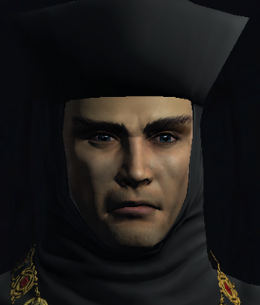 Q (or Q Junior) is the son of the omnipotent being known as Q.

The Q are an immortal, near-omnipotent species who have the innate ability of instantaneous matter-energy transformation, teleportation, and time travel.

The Q evolved over millennia to what they consider a state of "ultimate purity". However, after doing nearly everything in existence several times, this led them to an apathetic attitude to the universe. One Q in particular, known as Q, took an active approach to humanity and put Jean-Luc Picard at the center of his trial of humanity. Over the years, he took a more playful approach in creating discord among Picard's and Kathryn Janeway's crews.

It was his encounters with Janeway that led Q into the Q Civil War. This directly led to Q having a "child" Q with another Q, Q. The child Q, distinguished by the name Q Junior, had some formative experiences on the U.S.S. Voyager (with Janeway as his godmother) and took after Q's more active approach to humanity (and other mortals); notably by encouraging mortals to celebrate his birthday and the winter holidays.

There is an accolade related to talking to Q, e.g., during the Winter event, and being polymorphed by telling him to leave.