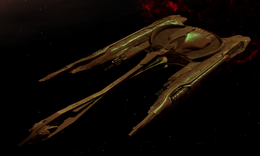 The Qoj-class Command Dreadnought Cruiser is a Tier 6 Dreadnought Cruiser which may be flown by Klingon Defense Force characters, including Klingon Empire-aligned Romulan Republic and Dominion characters. All faction restrictions of this starship can be removed by having a level 65 KDF character or by purchasing the Cross Faction Flying unlock from the Zen Store. This starship can be used from any level upon completion of the tutorial experience. As you level up, this ship gains additional hull, weapon slots, and console slots.

. This ship can be purchased individually, or as part of the Cross Faction Command Dreadnought Cruiser Bundle for 5,000

The Qoj-class Dreadnought Cruiser, like all vessels of the Klingon Empire, was built to be a powerful combat vessel. Unlike some lighter, more glory-seeking starships, the Qoj class is an intimidating presence whenever it decloaks onto the field.

Somehow even more frightening than its silhouette is the threat of all the unseen dangers lurking cloaked nearby, bolstered by the Qoj’s extensive array of coordination and inspiration abilities. All of its coordinated allies and fighter pets make an impressive “rock” to counterpoint the “hard place” created by its resilient defenses.

The Qoj-class Command Dreadnought Cruiser has a battle cloak that allows the ship to cloak during combat, granting stealth and a damage bonus upon decloaking. It has a unique cloaking effect as seen on Star Trek: Discovery.

These fighters are equipped with Disruptor Beam Arrays, and can use Beam: Overload I.

The Advanced variant of these Fighters can be obtained from the Dilithium Store, while the Elite variant is obtainable from the Fleet Starbase with unlocked Tier V Communications Array.

By using an [Experimental Ship Upgrade Token], the Qoj-class Command Dreadnought Cruiser may be upgraded to T6-X, unlocking an extra ship device slot, universal console slot, and the ability to slot an extra starship trait.

The following table compares various T6 Dreadnought Cruisers that may be flown by KDF captains.