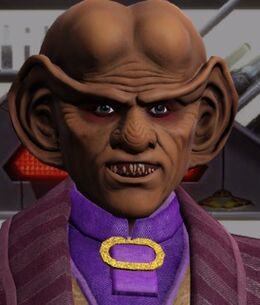 Quark, son of Keldar and Ishka, is a Ferengi businessman, first a barkeep and then head of Quark Enterprises. He is a brother to Rom, the Grand Nagus of the Ferengi Trade Alliance, and uncle to Captain Nog of Starfleet. He can be found at his bar, Quark's, on Deep Space 9.